A whole range of media and opposition politicians were having a field day in Washington and Jerusalem over what both depicted as the imminent downfall of two targeted leaders, Donald Trump and Binyamin Netanyahu. The two cases have nothing in common except for their synchrony and the fury of the extra-judicial campaigns waged against them. But in both cases, the celebrations were premature. 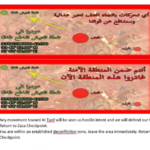 US leaflets warn Syrian troops, Hizballah away from border crossing

Syria claims an Israeli military attack on a Quneitra garrison

News admin - August 1, 2019
0
The Syrian army Wednesday reported that the IDF staged an attack from the Golan on its garrison in the smallThe post Syria claims an...