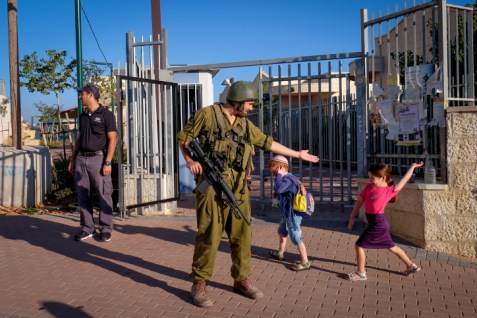 An Israeli soldier guards outside a kindergarten, after earlier a Palestinian Authority terrorist stabbed an Israeli reserve IDF officer in the Judean city of Efrat, in Gush Etzion on September 18, 2016.
Photo Credit: Gerson Elinson / Flash 90

The IDF Spokesperson’s Office has put together a video tweet bluntly pointing out that Arab terrorists in the Palestinian Authority carried out four attacks against Israeli soldiers this past weekend, all due to government-sponsored incitement. (There were more, but production does take time, etc…)

The fact is, the IDF is extraordinarily tolerant in its verbal response to terrorist attacks on social media; one sees little or no saber-rattling from the Israeli military, be it in English, Hebrew or even Arabic. Scan the social media sites and in general, one sees pictures of sunrises and sunsets, with teenage soldiers barely out of high school framed against the sky. Sometimes a photo of boys putting combat black on the cheeks of girls, and the girls putting combat green on the foreheads of their male counterparts. Occasionally a photo of the soldiers completing their beret march — or, more grim and to the point, one of older and more experienced soldiers on night duty having to track down and arrest fugitives who have carried out terrorist activities, sometimes successfully.

But here’s a perfect example of the kind of incitement that prompts the next generation of Arab teens to become young terrorists — and inspired the above complaint from the IDF.

This video was posted on Twitter right under the tweet from the IDF Spokesperson Sunday evening. It shows a young Arab boy who appears to be caught between his desperate father trying to rescue him from an attack by a vicious Israeli soldier and his fierce, slobbering military K-9 partner, an IDF dog tugging at the other side.

It would be almost credible, except Israeli soldiers don’t yell, even in Hebrew, “Who’s afraid, who!!??” as if to teach someone NOT to be afraid. Secondly, look closely at the canine actor. What is the dog wearing — or rather, not wearing?

The dog in this video is not wearing the official IDF muzzle and body gear, or headgear of any kind, any kind of body gear. IDF K-9 fighters are in uniform as are their human partners. And they have metal muzzles to protect them, as well as those they must track down and ferret out.

Welcome to Pallywood, which stands for Hollywood of the Palestinian Authority. The acting can be quite realistic — but frankly, it’s all bull.

About the Author: Hana Levi Julian is a Middle East news analyst with a degree in Mass Communication and Journalism from Southern Connecticut State University. A past columnist with The Jewish Press and senior editor at Arutz 7, Ms. Julian has written for Babble.com, Chabad.org and other media outlets, in addition to her years working in broadcast journalism. 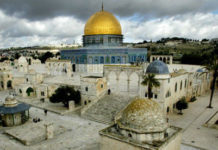 Gaza district emergency lifted. Netanyahu: Next time, the cost for terror will be higher

News admin - May 30, 2018
0
Prime Minister Binyamin Netanyahu warned Wednesday that in the event of another escalation, the IDF will conduct the most powerfulThe post Gaza district emergency...