US National Security Adviser H.R. McMaster, disclosing details of President Donald Trump’s Middle East trip next week, disclosed that no US-Israeli-Palestinian summit was planned for launching a new peace initiative as previously reported. He would meet Prime Minister Binyamin Netanyahu twice, the second time at a private dinner in his honor and that of the first lady. Trump will meet Palestinian leader Mahmoud Abbas at Bethlehem Tuesday, May 23. He will not be escorted by Israeli officials during his visit to the Western Wall in Jerusalem, where. McMaster said he would give up a prayer for unity among the three great world faiths formoderation and tolerance. He will also visit the Church of the Holy Sepulcher in Jerusalem. 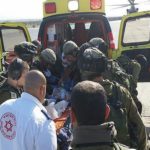 helicopter to save the life of a Palestinian baby

News admin - November 15, 2016
0
A medical team present at the scene administered first aid resuscitation and the Israeli army , after obtaining all required approvals , has deployed...

News admin - November 18, 2019
0
The demonstrations triggered in 100 Iranian cities including Tehran by the massive hikes in petrol prices and quotas announced onThe post Fuel protests in...

New US sanctions against Bashar Assad and wife

News admin - September 18, 2018
0
DEBKAfile will be off site for the Yom Kippur festival – from Wednesday evening to Thursday night. We send greetingsThe post DEBKAfile wishes its...