About 15 years ago, I stopped watching mainstream news when I found out how vastly different what the media reported was from reality. Recently, a video surfaced concerning a weekly protest in Nabi Selah, a town where the “Palestinians” claim that the Israelis have confiscated their lands to build a settlement. 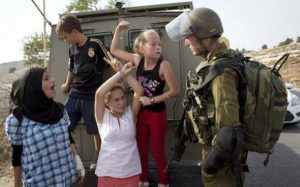 In the video, we see what looks like an IDF soldier with a boy in a choke hold. The boy’s family steps in to rescue him from the IDF soldier, who, in the video, comes across as Snidely Whiplash. The fair-haired girl who rescues her bother is, of course, an Arab version of Nell Fenwick. She is pleasantly dressed in blue jeans and a Tweety Bird t-shirt to win our sympathies.

The video went viral in hours. Pro-Palestinian reporters were referring to the boy’s mother as a lioness protecting her cub. Even otherwise pro-Israeli websites gave troubling reports, often devoid of context. Everyone knew that the IDF would get hammered for this, and it was all on video.

When I first saw it, Saturday morning, August 29, 2015, my first reaction was: Is this real? Looking at mainstream news sites confirmed that it was genuine.

However, I couldn’t help but notice the blonde heroine in the video, who had stepped in to save the day.

I figured that this was odd. Valkyries are not common in “Palestine.” Was this girl with a Scandinavian NGO? Then I remembered: about three years ago, a blonde Arab girl defying IDF troops went viral on the internet. Could this Brunhilde be the same girl, only a few years older?

So I checked on some right-wing Zionist sites, like Arutz Sheva and IsraellyCool, and sure enough, they had noticed, too. They had nicknamed her “Shirley Temper,” and she was a Pallywood star. Her name is Ahed al-Tamimi (sometimes the al- is left off), and she has been trotted out for years.

Suspicions confirmed. The video was real, but this was a setup. And the girl? She was straight out of central casting.

In fact, Ahed al-Tamimi is a blue-eyed natural blonde. Had she grown up in America, she would be starring in a sitcom on The Disney Channel. As it is, she was fêted three years ago with a courage award by Turkey’s Erdoğan and is the new darling of Arab media.

In a recent performance, she showed up dressed as a Brazilian soccer fan, as you can see to the left – or here – where a group of Palestinian children gathered in a protest to ask FIFA to suspend Israel from world soccer. Miss al-Tamimi is leading the parade, bedecked with Bavarian Hofbräuhaus braids. She sports a smart ensemble. Next to her is another al-Tamimi, likely her cousin, Nour, who seems to have green eyes.

What the media does not dwell on is that these protesters are being led by the al-Tamimi clan, which is waging a low-grade war against Israel.

Ahed’s father, Bassem al-Tamimi, has been arrested many times and made a name for himself in the world media with his protest activities. He claims to be a fan of Mahatma Gandhi, but he somehow considers rock-throwing compatible with non-violence.

While Bassem spoke admiringly of Mahatma Gandhi, he didn’t worry over whether stone-throwing counted as violence. The question annoyed him: Israel uses far greater and more lethal force on a regular basis, he pointed out, without being asked to clarify its attitude toward violence.

This is more than just Ahed’s parents. It seems that the whole al-Tamimi clan is as war with Israel. Bassem’s sister, Ahed’s aunt, died in an Israeli prison – they claim she was pushed down some stairs by a soldier. Bassem’s cousin – Ahed’s first cousin, once removed – killed a setter. Bassem’s brother-in-law, another relative of Ahed – was shot in the back, and killed by the IDF, apparently, as reported by Haaretz, without justification.

[IDF i]nvestigation finds no reason to use live ammunition in the November shooting death of Rushdie Tamimi, 31, in Nabi Saleh, in the West Bank.

Her sixteen-year-old brother was arrested by the IDF. He was later released.

All this aside, there is more to the “choke hold” incident from August:

The father of the 12-year-old, Bassem Tamimi, who observed the entire incident from behind the camera, said on Facebook that his son had to be taken to hospital, and accused the Israelis of shooting another 9-year-old son two days earlier.

This is not merely a Pallywood production. The IDF is fighting a whole clan, who may be the MacGregors of “Palestine,” except they don’t drink whiskey. Bring out the pipes: the Campbells are coming (or in this case, the IDF).

This would have been a total media disaster for Israel, except that some Israeli activists, led by IsraellyCool, marshaled all their resources to contact the media with the facts. The Daily Mail had to rewrite their whole story.

By Sunday, much of the media on the net had become acquainted with the real story behind Shirley Temper, and the character of the story had changed, but not before some damage was done.

How did such berserkers end up in the Mideast?

In the latter half of the 19th century, the Ottoman Empire was crumbling. One by one, the Christian Balkan states won their independence. Among the Balkan populations, there were some Europeans who had converted to Islam to win Turkish favor and obtain privileges. As Turkey receded, they became fearful of Christian retaliation. So the Turks allowed these Europeans to move to then Palestine, where they could garrison the area against Bedouin marauders of the type Mark Twain ran into. They were called Bushnaks, which is Arabic for Bosnian. In time, they married into the general population, but fair-complected Muslims are now called Bushnaks.

Essentially, they are Bosnian Slavs, but within those Slavs is a strain of Ostrogothic Viking blood from the 4th-century Germanic invasions. So our Tamimi sisters probably have some Slavic and Nordic blood in them. Just a guess! They could have some Crusader in their bloodline, but that would have attenuated over a thousand years. The Bushnak migrations were only four or five generations ago and might have remained more insular, which is what I suspect.

The Tamimi tribe in Nabi Selah has a noticeable number of Arabs with recessive North European traits. Either their patriarch Ishmael was a Goth, or methinks these Tamimis are a lot more Indo-European than Semitic.

Are they Arabs? Yes! Some ancestors might have been in the area for centuries. Turkish records are unreliable, as people hid from the census to avoid taxes, so we cannot assume that all their ancestors are necessarily recent arrivals to the area because they are not on some Ottoman record. But we would be foolish not to notice that these people have a lot of European blood.

On Saturday, the story flip-flopped from rants about an ogrish IDF villain to a more balanced story about a family that essentially set the IDF soldier up. The soldier went from villain to victim as the truth came out over the hours.

This is typical on the internet. A fierce media war is waged between Palestinian and Israeli activists. I am amazed how fast both sides can respond, with vicious comments, to any story about Israel or Palestine, and how rapidly the stories can change. This time, the turnaround was amazingly fast, and Israel won. Not always! Pro-Israel media have been caught at times also.

There is a vicious media war going on concerning the Mideast. I do not trust the media.

First US spy satellite sent into orbit by commercial agency